1- An international round table with participation of European representatives held in LPR
2- 'You have enough weapons': German media slams Kiev ambassador's request for arms 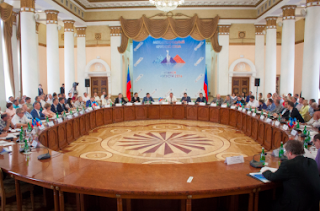 An international round table with the participation of the European representatives from Russia, Finland, Austria, France, Italy, the DPR, South Ossetia and Abkhazia was held in Lugansk.

According to the agenda the main topics of the discussion were the Ukraine's unwillingness to observe Minsk agreements, an appeal to the OSCE to hold early replacement of the Special monitoring mission (SMM) on security on the contact line and
to encourage the Council of Europe and the UN to use their influence to boost holding of local elections in Donbass.

The round table discussion was attended by the LPR Head Igor Plotnitsky, the chairman of the LPR People's Council Vladimir Degtyarenko, the chairman of the parliament of the Republic South Ossetia Anatoly Bibilov, the chairman of the DPR People's Council Denis Pushilin, the member of the Russia's Federation Council of Federal Assembly Andrey Sobolev, the director and chief editor of Donbass News Agency Janus Putkonen (Finland), the head of the public organization “Save Donbass People” Andrea Palmeri (Italy), the international observer and political analyst Johan Bäckman (Finland), the head of the regional committee of anti-fascists of Ukraine to Rome Fausto Marini (Italy), the public figure Alfred Almeder (Austria).
The participants of the forum discussed the implementation of the Minsk Agreements by Ukraine, the appeal of the LPR residents to the UN Security Council, the issues concerning the state construction of the Lugansk People's Republic.

Speaking to the German radio station Deutschlandfunk (DLF) on Friday, Ukrainian Ambassador to Germany Andriy Melnyk urged Berlin to provide Ukraine with lethal weaponry. In response, his interviewer suggested that if there's one thing Ukraine doesn't need, it's more weapons.

“What we are asking for is defensive weapons; for example, if we had artillery detection systems, it would reduce the risk of further escalation, because the separatists would have to think twice about shelling, knowing that they would face an immediate, precise, devastating response, he said.”

But in a post-interview commentary, Melnyk interviewer Sabine Adler suggested that Ukraine already has an enormous armory, and is fully capable of creating the weapons systems it requires for itself.

"If there is something Ukraine has an abundance of, it is armaments. Accordingly, she added, Berlin should refuse to deliver such weapons, not only in the interest of preserving the fragile peace in Donbass, but "because Kiev's desire for them is simply incomprehensible".”
“Why does Ukraine, which has been a gigantic weapons producer for decades, and one of the largest arms exporters in the world, not manufacture these weapons themselves, if they need them so badly? Adler asked.”

The journalist warned that if Germany jumps in, it would jeopardize its role as an honest broker in the conflict, reports Sputnik.

And the request for lethal weapons isn't the only area where Kiev is acting in an inconsistent manner, Adler complained. For example, the much-promised fight against corruption continues even at the level of the presidential administration, with President Poroshenko still not fulfilling the promise made during his election campaign two years ago to sell his companies. "Instead, he has installed similar [oligarchic] clan structures, of the kind that the Maidan protests were directed against," the journalist noted.

Moscow has repeatedly warned Western countries against providing lethal weaponry to Ukraine, suggesting that the move would only exacerbate the civil war in the country's war-torn Donetsk and Lugansk republics. Officials in some Western capitals have responded accordingly, suggested that the provision of lethal weapons to Kiev could have deadly consequences.
DONi News Agency
---------

“This is my idea that could be implemented — to produce weapons in cooperation with the Americans on the Ukrainian territory, Chaly said in an interview.”
He also expressed hope that the United States would soon give a positive "signal" on granting Ukraine lethal weapons.
DONi News Agency
---------

The situation in the Donetsk People's Republic has not changed and remains tense.
Over the past day the Ukrainian punishers violated the ceasefire regime 520 times.

The enemy keeps using artillery for shelling the Republic's territory. In total there were launched 114 artillery projectiles of 122mm and 152mm calibre, and 234 shells of 82mm and 120mm calibre. Besides, the enemy opened fire from infantry fighting vehicles, grenade launchers and small arms.

War criminals Gorbatyuk, Vodolazskiy, Zabolotny, Zubanich, Goraz and Panchenko continued competing with each other in shelling the Republic’s localities for the purpose of exterminating civilians.

Again civilians of the Republic and their houses suffered from these war criminals’ actions.
Six houses sustained damage in the Zaitsevo locality and the Petrovsky district of Donetsk.

One civilian, Babchenko Nikolai Vladimirovich, born in 1974, died in the Kirovsky district of Donetsk.

One soldier lied in the ranks of the DPR People’s Militia.
We have registered movement of the AFU equipment forbidden by the Minsk Agreements near the contact line.

There is noted enemy’s air reconnaissance conducted with application of the UAVs along the whole contact line carrying out fire adjustment for artillery units.

All the data on violations of the Minsk Agreements were passed to the OSCE Monitoring Mission and JCCC representatives.

The Ukrainian Ministry of Defence continues increasing efforts on media coverage of the AFU’s alleged progress in the ATO zone in order to hide the true situation from the public. So, Ukraine’s Deputy Defence Minister stated that already more than 30 thousand AFU soldiers had earned rewards for the destroyed equipment of the People’s Republics Armed Forces and successfully performed tasks in the so-called "anti-terrorist operation" zone for the total amount of 135 million hryvnias. Payments could have taken place – but for the AFU equipment which had to be decommissioned for scrap after road accidents, fire unit’s explosion and violations of operation requirements.

Thus, we see another lie from the Ukrainian Defence Ministry representatives. I dare to assure you that the DPR People’s Militia equipment and arms are in good repair and ready to fighting application in case of the armed aggression on the part of the Ukrainian punishers.