Slavyansk/End Of An Epoch: Semyon Usachev Has Died At 94. His Picture, Writing On The Reichstag Wall “Went Viral” 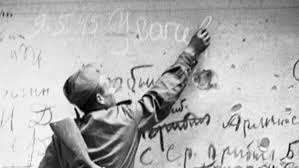 Irony: his house in Slavyansk was shelled by neonazis in 2014

On November 11, Semen Usachev
passed away in Slavyansk. On May 9, 1945 he left his name and the date on the Reichstag building. The photographer captured this moment, and 40 years after the Great Victory, the picture became one of the most popular military postcards. The famous image of Semyon Usachev is also part of the three-dimensional panorama “Battle for Berlin” in the Victory Museum on Poklonnaya Hill.

He began his military career in 1943 in the battles of Taganrog, reached Sevastopol, got surrounded several times along the way, and miraculously survived. He was wounded and continued to fight as a communications artilleryman near Gomel and, reached Berlin as part of the 56th artillery division. Semen Usachev said that his division received news of the surrender of Germany, when he was 60 km north of Berlin. The commander allocated vehicles and allowed the soldiers to go to the Reichstag. The famous photograph depicts a column of the Nazi “lair” with autographs of the victors, and a young soldier writes in chalk his name and date: “9.5.45. Usachev.

This picture spread all over the world. In 1985, a postcard with the famous photograph was published in a print run of 1.5 million.
As Usachev himself told in an interview for the Rodina newspaper, he had to ask the driver of the American Studebaker to back up to the wall so he could stand on it. He was short and just weighed 43 kg. boots and all.

“I stood on tiptoe on the edge of the truck and wrote: “9.5.45. Usachev.” This is the first thing that came to mind. Yes, and you can’t sign a lot, the heavy machine gun behind me was very disturbing. And already in the evening, when we were leaving for the division’s location, I saw our red flag above the Reichstag dome. Victory!” said the front-line soldier then.

Semyon Usachev was born in the village of Staropavlovskaya in the Kirov region of the Stavropol Territory, but after the war, Semyon Usachev went to visit his sister in Slavyansk, met his love there, and stayed in the city.

His move to Slavyansk once again put him in the front
For 35 years he worked as an electrician, built a house, tended a garden. He leaves two daughters, as well as grandchildren and great-grandchildren.

According to one of the daughters of the famous front-line soldier, Semyon Usachev often went by invitation to Moscow to the main Victory Parade.

But the veteran, even in a nightmare, could not imagine that the war would come to Slavyansk. Relatives of Semyon Usachev asked not to discuss the events of 2014 with the front-line soldier: this topic was so painful for him that when the conversation started about this, they had to call an ambulance for the veteran. It is noteworthy that over the bed of Semyon Usachev there are pockmarks of shell fragments. When there was a shelling of his house, the veteran bitterly burst into tears.